How will we escape the current Dark Age of Programming? What will trigger a Software Renaissance? History tells us that major intellectual shifts usually arise not from lone geniuses but from subcultures that suddenly coalesce in a burst of invention and discovery. I have found an interesting book that looks at the group dynamics of such subcultures:  Collaborative Circles: Friendship Dynamics & Creative Work by Michael P. Farrell (suggested by Patrick Collison). From the blurb:

Many artists, writers, and other creative people do their best work when collaborating within a circle of like-minded friends. In a unique study, Michael P. Farrell looks at the group dynamics in six collaborative circles, and gives vivid narrative accounts of each: the French Impressionists; Sigmund Freud and his friends; C. S. Lewis, J. R. R. Tolkien, and the Inklings; social reformers Elizabeth Cady Stanton and Susan B. Anthony; the Fugitive poets; and the writers Joseph Conrad and Ford Maddox Ford.

Farrell presents a systematic description of how such collaborative circles arise and develop. I’ve been trying for years to organize various sorts of groups to advance progress in programming, following the established topography of academic organizations like workshops and working groups. Farrell’s book presents a roadmap to an entirely different terrain: the informal underground rebellions where breaking changes actually happen. Much to consider…

Here are some excerpts from Chapter 7: Toward a Theory of Collaborative Circles.

… collaborative circles are likely to form in a magnet place where the high-status masters are gathered, but on the periphery of that network. Highly ambitious, talented novices who are attracted to a magnet place but find themselves cut off from prestigious mentors are more likely to turn to their peers for support and guidance. – p. 267

Ambition, coupled with their marginalization, may be what fuels the resentment and rebellious tone characteristic of their early interaction with their peers – p. 268

Collaborative circles that develop innovative visions flourish in turbulent cultural environments, where two or more vision of a discipline … view for centrality in a single place. … The dialogue at the center empowers those on the periphery to synthesize elements of the old perspectives and to conceived an alternative vision of their own. – p. 268

Once formed, a circle constructs its own subculture. At the heart of the subculture is the shared vision of the members — a new theory and methodology that they introduce into their discipline. … Whatever the content, a new vision is often viewed with suspicion by authorities in a field. A new vision not only raises questions about the value of existing visions, it also can have political and economic consequences for those who have built their careers on existing visions. Not surprisingly, those who advocate the new vision are often viewed as threats by the established authorities at the center of a discipline network. These deviant innovators often become targets of formal and informal sanctions.
In the early stages of circle development, the supportive friendships within a circle enable the members to resist pressures to conform to the dominant vision of their field. … During the quest stage of circle development, the group provides a supportive context where the members are free to explore new, “deviant” ideas. During the collective action stage, when the members take the new vision into the community, the circle provides the support they need to cope with rejection, ridicule, and sometimes even legal sanctions. – p. 270-271

The dynamics of the circle thus not only buffer the pressures to conform, but encourage experimentation. The charismatic leader’s sense of mission, self-confidence, and daring are contagious. Under the spell of the charismatic leader, the members are willing to try many things they would never have done alone. … Those who resist the momentum of the circle — the conservative boundary markers who cling to conventional visions as well as the radicals who go too far in rebelling — stimulate discussion and clarification of the circle’s emerging vision. – p. 271

Collaborative circles form among highly ambitious members of a discipline network who share a common set of attitudes and values and who speak the same language. … Because of their commonalities, members of successful circles share many assumptions about what is important and unimportant, they can laugh at one another’s, and they do not have to justify every opinion or explain every detail of their thinking. In short they feel almost a familial sense of being at home with one another. – p. 273

Because the magnet place has a reputation and sends out similar signals to a wide network, those who go there are likely to have much in common. Second, within the social network at the magnet place, circles often form when one or two people — the gatekeepers or matchmakers — bring the members together. The gatekeeper’s criteria for friendship filter potential members so that those chosen have many attitudes and values in common. … Without the common language and values that enable members to validate one another’s basic assumptions and argue with one another persuasively, a circle is likely to disintegrate during the quest stage, if not sooner. – p. 273

No member is overly dependent upon any other. The members can disagree with one another openly, even insult one another with humor, as friends can, without fear of retaliation. … Although the members might tease or mock one another, group meetings are relatively safe spaces to speak their minds. … In the quest stage, the sense of equity in the distribution of rewards contributes to the trust and intimacy necessary for instrumental intimacy and creative work in pairs. – p. 275 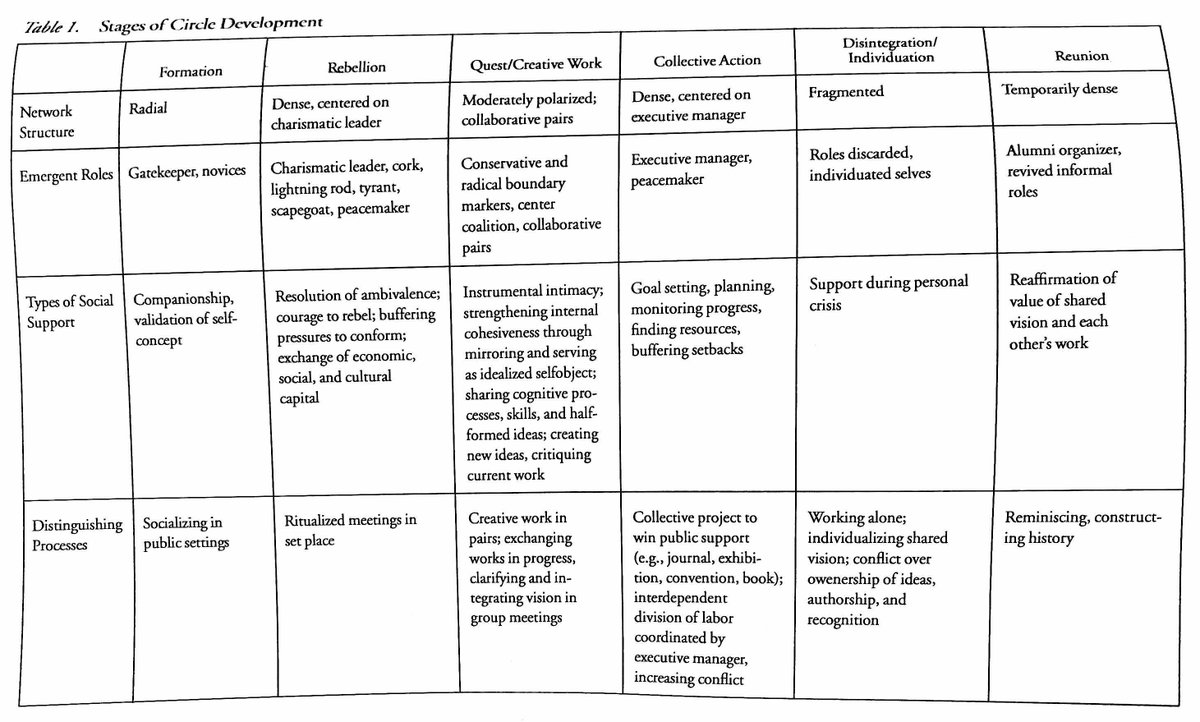 In most cases, the activities of colleagues and friends in a discipline are like parallel play among children in a sandbox. They may be aware of one another’s work, but they do discuss it, influence one another, or carry out cooperative projects that draw out creativity in one another. … What is necessary to move a group of homogeneous equals towards becoming a collaborative circle? … Successful circles usually form as radial networks. At the center of the network is the gatekeeper, a person who is instrumental in drawing the members together and introducing them to one another. … The gatekeeper selects friends who are highly ambitious and committed to the same line of work — people who aspire to make a mark and gain recognition in their field. Some if not all the members selected by the gatekeeper may have an inflated sense of their own destinies … They see something lacking in the mainstream vision of their discipline, and they want to do something about it …. They may have high aspirations, but they feel far from being masters of their chosen disciplines. … At first they may share only opinions, ideas, and works that they are confident will impress their new friends. – p. 276-278

The members may identify a tyrant on the edge of their network — an authority associated with a vision they reject. One ritual in group meetings may be relating stories that deflate this tyrant. – p.279

When the members are sizing one another up, the exchanges may stabilize at a relatively superficial or guarded level. But eventually, for reasons that vary for each group, trust reaches a critical point, and one member takes a risk and opens the door to more intimate disclosures. … If the recipient of the “gift” follows the lead and reciprocates, the process can quickly intensify until all members are sharing their most secret, undeveloped ideas. – p.280

Ultimately, circles with a high tolerance for irritant boundary markers in their midst may be more likely to develop new visions in their fields. Such groups are less prone to conformist “groupthink” dynamics – p.282

Beginning in the quest stage and continuing into the creative work stage … interactions include a pattern of working in pairs. … A respected peer who serves as an admiring but demanding audience can be a powerful stimulus to creative work. … Circle members develop the highest degree of trust, take the greatest risks, and demonstrate the most interdependence in thinking when they work in pairs. … Because each can count on the other to do the work of critical evaluation, each is more free to follow through on creative ideas without inhibition. p. 284-285

When a group ritualizes occasions where all members meet together, a center coalition of members often develops the final synthesis of the circle’s vision. … The center coalition consists of the members who consolidate the insights that emerge within collaborative pairs, integrate them into a coherent theory, and convey the vision to newcomers into the circle. – p. 285

The collective action stage of a circle begins when the members decide to carry out a group project aimed at winning support for their vision outside their own network. The project could be a journal, an art exhibition, a grant proposal, or some other task that requires interdependent work. Whereas in previous stages, the objective was to create a new vision, in this stage the objective becomes to win support for the vision from authorities and from the public. Up to this point, the journey has been inward to mine the creative process; now it turns outward. … To succeed at the new tasks, a new type of leader is required — one who can balance budgets, make contacts with influential people, talk to the media, orchestrate the group members for organized events, and in other ways act as an executive manager. … A formal normative code may replace the authority of the charismatic leader. – p. 286

The disciplines in which collaborative circles form are not only becoming more inclusive of women, they are also becoming more diverse ethnically and racially. It will be interesting to examine how gender and ethnic diversity affect the formation and development of circles. My findings suggest that homogeneous circles are more likely to speak the same language, feel at home together, and build the degree of trust characteristic of collaborative pairs. However, I have also found that some degree of diversity within the circle, exemplified by the circle boundary markers, contributes to creativity and to the clarification of the circle’s new vision. It may be that there is a range of diversity that is most conducive to successful circles. – p. 291

In this research, I have found that circles are usually formed by people in their twenties and early thirties, when they are likely to be in the early stages of their careers. However, as societies deindustrialize and the population ages, the relationship between age and circle formation may change. – p. 292

Disciplines vary in how much they rely on magnet places as training grounds for new members. Those that do not form in magnet places are more dependent on informal networking to locate potential members. As Internet communication becomes more common, it may be that circles will form among widely scattered, like-minded people who discover one another through electronic communication. In addition, Internet communication may make it easier for marginalized people in a discipline to discover one another.

When a person sits alone in a study and communicates with another person by computer, there often is a sense of immediate intimacy. Because they give off minimal personality clues and nonverbal feedback, they can play parts for one another like that of a therapist who maintains the optimal, empathic distance and permits her image to be filled in with projections and transference. … Future collaborators may discover that Internet communication provides that right mix of intimacy and distance to nurture collaborative pairing, egalitarian openness, and instrumental intimacy. However, without the depth and breadth of communication that occurs in a face-to-face meeting, I doubt that a group can have the kind of profound influence on its members that we have seen in the case studies presented here. Internet communications may facilitate the formation of circles, and, like the letters between Freud and Fleiss, it may enable them to maintain contact between meetings, but I do not think it allows for the kind of in-depth dialogue that leads to meaningful personal development and creative work. For this kind of interaction, there is no substitute for ritualized meetings and working side by side. – p. 293